So, it’s been half a year since I got the Alienware Aurora R7, and I have had my fair share of bugs and annoyances. Today, I’ll talk about a few of those.

Every good work of software starts by scratching a developer’s personal itch.

— The Cathedral and the Bazaar,
Eric S. Raymond.

The Alienware series apparently has a fairly common issue of panicking on shutdown (1, 2, 3, 4, 5). The apparent cause is something in the I2C Designware module. The solution used to be [disabling it][21], but things have changed since then, and now the Arch Linux kernel has it baked in instead of as a module that could be blacklisted. With some help from the Unix & Linux Stack Exchange, that problem has been overcome. The solution is to blacklist a kernel function, as Stephen Kitt suggested in February, and the correct function was identified by Yurij Mikhalevich right around the end of May.

So, to fix the panic issue, I needed to add the following to the kernel boot parameters:

In the intervening months, I had my own hack around this: while trying to figure out when exactly the offending driver was loaded, noticed that shutting down worked fine if I booted directly to the systemd poweroff.target. So I added an additional EFI boot entry, which started the kernel with systemd.unit=poweroff.target, and then wrote a short script that enabled a one-time boot to that entry and restarted. So shutting down took a while longer, but worked fine as long as I called that script.

So my setup looks something like this1 — with a horrible mess of cables connecting the whole lot:

So my monitor, a 24” BenQ, is visually below the 46” Sony TV. The monitor is smaller, but much closer than the TV, so reading is far easier on it. As a result, it is my primary display when using the PC. However, the speakers are connected to the TV’s audio out, since I also use the TV via a Chromecast, and in the past via an HDMI switch that connected it to my laptop. So it makes sense for whatever’s using the TV to have its audio go via the speakers.

This is where the annoyance begins. Since both displays are connected via HDMI2, both are available for sound output (and the monitor has a built-in speaker). Since the monitor is the primary, sound is usually preferentially routed through it, on both Windows and Linux (with PulseAudio). Windows does a better job of remembering after I select the TV as the output once. However, on Linux, every time I switch display configuration (from mirror to extend and vice versa), which I do quite often depending on whether I am gaming (mirror) or watching videos (extend), output is reset to the monitor. (Or worse, sometimes it picks the PC’s S/PDIF output, which has nothing connected to it at all!)

Worse still, the sound settings are not at all helpful here: 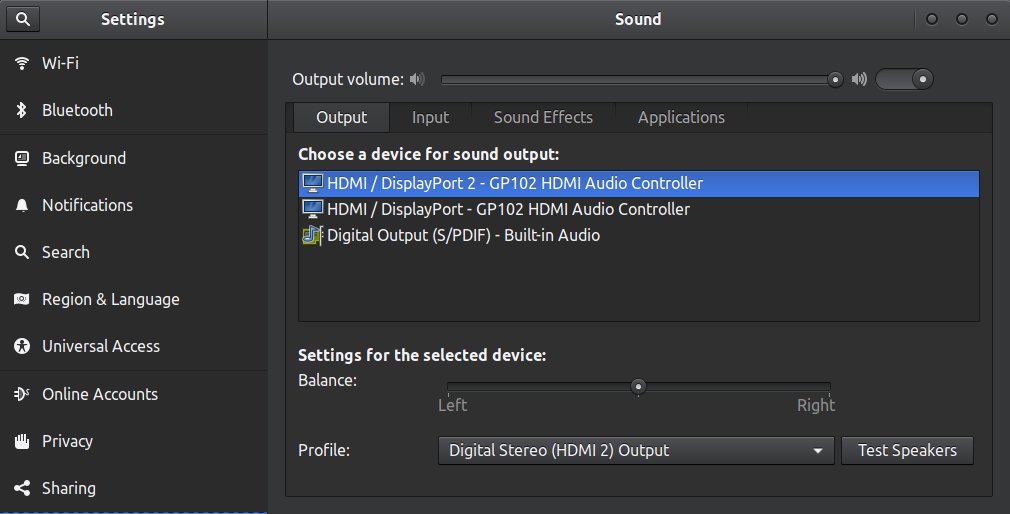 Thus, I have two problems (and regex ain’t one of them):

I tried fiddling with ~/.config/monitors.xml, but it seems that file isn’t watched for changes. So modifying that file doesn’t help. I tried an extension for GNOME Shell, but I quickly ran in to problem (2) above. So once I again, I settled on writing up scripts. Setting arrangements is easy enough with xrandr:

Here, DP-1 is the monitor connected on the DisplayPort, and HDMI-0 is the TV on (surprise, surprise!) HDMI. It’s not difficult to see which is which:

The (far newer) monitor has far more supported modes. So it’s easy to parse them out and see which is which:

The tricky part, however, was PulseAudio. I find it confusing. There’s pactl and pacmd. There’s all those configuration files, default.pa and whatever else, written in a custom format, from what I can tell. Sinks, sources, ports, cards, …! ‘Tis enough to make one throw up their hands in despair!

Also, looking at the pamcd and pactl outputs, it’s obvious that trying to parse that deeply-nested structure using regex is just asking for trouble. However, PA doesn’t have first-party libraries for accessing this data from friendly languages like Python. There have been a few projects trying to expose such an API, but they don’t seem well-maintained or extensive in coverage. Worse yet, even though the pactl manpage says:

pactl actually seems to expose more information than pacmd. For example, here’s part of the output for pactl list cards:

At any rate, getting the correct profile for the output I want to use is now easy with pactl:

This gives the card name and the profile name, then I can do:

Now all I need to do is wrap these up in scripts, have the display arrangement script set the sound output as well4, and use this neat extension to add a couple of icons to my panel, and bam! A click is all I need to switch profiles or fix sound if some bug caused the sound to go wandering around.

I think, all said and done, a better way would have been to use PA configuration files to set a higher priority for the TV. But I can’t be arsed to learn the configuration language. So: ¯\_(ツ)_/¯ My scripts work and I postpone PA for a time when I have far more free time.